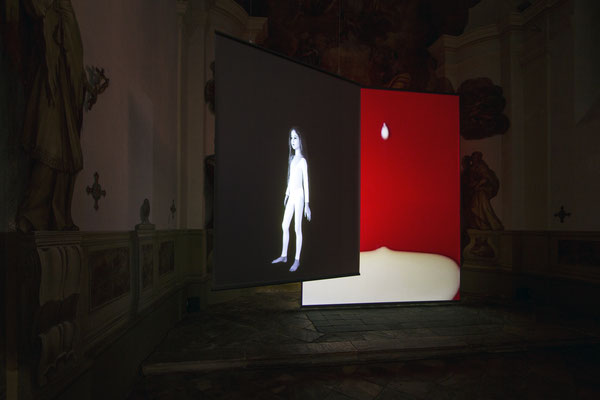 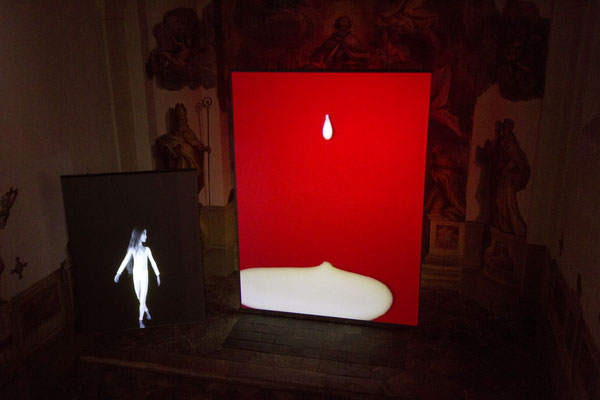 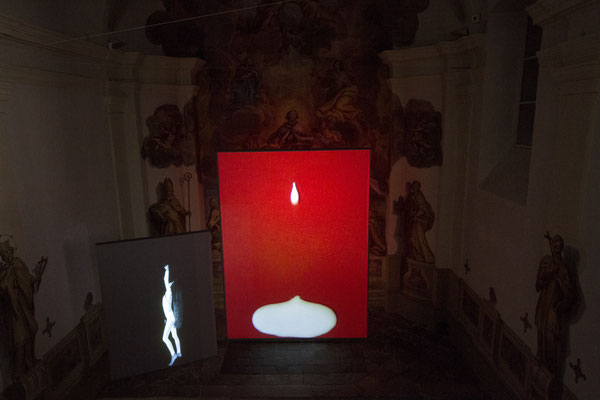 Especially selected compositions for flute and violoncello by Luca Lombardi

time and person is an installation with two large-format video projections on suspended or fixed screens by Regina Huebner and the specifically combined music by composer Luca Lombardi, which will be performed live by flutist Roberto Fabbriciani.

In time and person we see on a large screen the video time: oversized drops of milk are continuously falling down on a red background forming a white lake of milk. At the certain extension of this lactic lake the direction will reverse and the drops will rise, representing the infinitely ongoing of time.

On a second, smaller screen in spatial relation to the first one, we see the the video person: the image of a moving and dancing figure in black and white. This 5 year old child has very long, never shortened hair. This little person reflects the sense of the desired freedom and symbolize human existence. The length of the hair is exactly her lifetime at that moment.

The flutist Roberto Fabbriciani plays music by composer Luca Lombardi in a special performance, related to the videoinstallation, moving in the space, introducing another phenomean of time: “the present”.

See the videoclip of part of the performance by Roberto Fabbriciani, held in the baroque chapel of the Museum of Modern Art in Austria, in 2016: https://youtu.be/VmNtDTiqDO4

Video-clip of person: https://youtu.be/yhfIosakxPE Please note: the music is the original soundtrack on which the performer danced. Due to the video-edition, the music DOES NOT CORRESPOND on the real compositions by Luca Lombardi, but it is alterated!

The internationally recognized flutist Roberto Fabbriciani leads up the compositions by Luca Lombardi in a musical performance and stages his concert in the spatial installation time and person interacting with the images and the artistic concept. His live performance adds the “present” as a further element of time to Regina Hübner’s artwork, in which the two video projections are representing the personal time and the global flow of time, setting Luca Lombardi’s works in a spatial and temporal music experience.

Maestro Roberto Fabbriciani, one of the most important interpreters of contemporary music and soloist at the highest level, is a profound expert and interpreter of Lombardi’s music.

"… regina hübner‘s ironic impetus is based on the overt reference to the reversal of a process as represented in the chosen medium of video. the system of reference changes from the philosophy of time to the level of communication. the transformation of a process – in this case dripping- from a physical to an electronic medium breaks open the closed system which is one of the conditions of entropy…” Arnulf Rohsmann, art historian and scientific writer, in regina hübner / zeit (¹ 2005, Change + Partner 2001 – 2005, Rome, Italy and ² 2016, MMKK Museum Moderner Kunst Kärnten, Klagenfurt am Wörthersee, Austria).

Roberto Fabbriciani was born in 1949 in Arezzo, Italy.

Fabbriciani is one of the most important interpreters and soloist of contemporary music.

He worked for many years with Luigi Nono, in the experimental studio of the SWF in Freiburg, blazing new and unusual trails in music.

Luca Lombardi (Rome, December 24, 1945) is one of internationally most known Italian composers.

After the baccalaureate at the German School in Rome, he studied composition in Rome, Vienna, Cologne and Berlin (among others with K. Stockhausen, B.A. Zimmermann, P. Dessau). At Rome University he earned a PhD in German Literature (“Lingua e Letteratura Tedesca”).

From 1973-1994 he was a professor of composition at the Conservatories of Pesaro and Milan, since then he is a freelance composer.

Together with an acoustical physicist and a musicologist, he published the treatise on orchestration,”Instrumentation in der Musik des 20. Jahrhunderts”, Celle, 1985.
A selection of his writings was published under the title Construction of Freedom (Baden-Baden, 2006).

The renowned German publication “Musik-Konzepte” published in 2014 a double issue with 8 essays on his music.

He is a member of the Academy of Arts in Berlin and of the Bavarian Academy of Fine Arts (Munich).

In 2015 he was awarded the Federal Cross of Merit (Bundesverdienstkreuz) from the President of Germany Joachim Gauck.

In 2008 he acquired the Israeli citizenship and since then he divides his time between Lake Albano (Rome) and Tel Aviv.

Luca Lombardi is one of the most represented and internationally recognized italian composers.