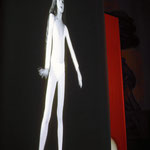 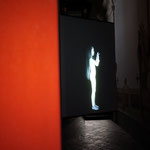 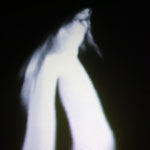 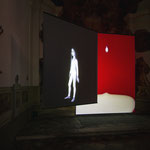 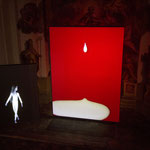 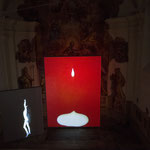 Regina Hübner shows time and person at MMKK the Carinthian Museum of Modern Art, Artspace Burgkapelle in Klagenfurt am Wörthersee. It is the first solo exhibition in Austria by the artist, established abroad and especially in Italy.

time and person is an installation with two large-format video projections on suspended screens and the specifically combined music by composer Luca Lombardi.

regina hübner‘s ironic impetus is based on the overt reference to the reversal of a process as represented in the chosen medium of video. the system of reference changes from the philosophy of time to the level of communication. the transformation of a process – in this case dripping- from a physical to an electronic medium breaks open the closed system which is one of the conditions of entropy. Arnulf Rohsmann regina hübner / zeit (¹ 2005, Change + Partner 2001 – 2005, Rome, Italy and ² 2016, MMKK Museum Moderner Kunst Kärnten, Klagenfurt am Wörthersee, Austria). Translation by F. Mered.

In time and person, oversized drops of milk are continuously falling down until the certain moment of the extended lactic lake. Then, the direction will be reversed and the drops will rise, representing the infinitely ongoing of time.

In relation to this image there is the moving and dancing figure of a child. The long, never shortened hair of this little person reflects the sense of the desired freedom and symbolize human existence.

The compositions by Luca Lombardi, which can be heard recorded throughout the duration of the exhibition, has been compiled for time and person in a special combination with repeats and pauses by Lombardi himself. The pieces of music, for cello and flute, are in a close connection with the visual form and the conceptual idea, but they retain their independence as musical compositions.

Zeit (time) and Person (person) were exhibited in different versions in Italy:

This text will accompany also the exhibition time and person at the Kunstraum Burgkapelle of MMKK Carinthian Museum of Modern Art.

The art historian and science writer Arnulf Rohsmann discusses the artist's work under aspects of time on art-historical and philosophical level in particular reference to time and person and other selected works, in a conversation with Regina Hübner.

Topics of enigmatisation of the image, deceleration / acceleration and divergence of complex levels of action are discussed based on works from the recent creative period of the artist. The simulated reversibility in closed systems, which manifests itself in works such as happen and unhappen and other comparative examples, theorized and brought in context with the visualized static and moving time in those submitted artworks.
Examples of works and excerpts from video works by Regina Hübner will be shown.
A compilation of discussed the works in their original length will be on display during the exhibition.

Arnulf Rohsmann has written for Zeit (time), which was exhibited at the experimental art-space Change + Partner Contemporary Art and at the Polish Institute, Palazzo Blumenstihl, in Rome, the text regina hübner / zeit. This essay, first published in Rome in 2005 in the exhibition catalogue Change + Partner Contemporary Art 2001 - 2005, accompanies the exhibition time and person in the Artspace Burgkapelle of MMKK Carinthian Museum of Modern Art.

Rohsmann knows the artistic work and the operation of Regina Hübner since her project Anonymus dedicated to Vally, which was shown from 2002 at the MLAC Museum of Contemporary Art of the University of Rome and other institutions and has written essays for symposia at the Austrian Cultural Forums in Rome and Milan.
In June 2016, he will speak about the artist’s project temps – durée. Zeit, Dauer und Stillstand. Il tempo come distanza, il tempo come permanenza. at the Italian Cultural Institute in Vienna, in which a video installation by Regina Hübner will be shown with the music by Luca Lombardi.

Arnulf Rohsmann is an art historian and science writer and is considered an expert of the phenomenon "time" on international level.

Workshop with Regina Hübner about the person and the universal flow of time in connection with today's means of communication that allow physically unlimited simultaneity.

The unique flute technique which Fabbriciani has developed, expanded the sound possibilities of this musical instrument. He is a soloist at the highest level and internationally recognized and appreciated.

Luca Lombardi, born in 1945, is one of the most important contemporary composers. He studied composition in Rome, Vienna, Cologne and Berlin (among others with K. Stockhausen, B.A. Zimmermann, P. Dessau).

He was a professor of composition at the Conservatories of Pesaro and Milan and he is author of several scientific essays. A selection of his writings was published under the title Construction of Freedom.

He is a member of the Academy of Arts in Berlin and of the Bavarian Academy of Fine Arts (Munich). In 2015 he was awarded the Federal Cross of Merit (Bundesverdienstkreuz) from the President of Germany. Conferences in Europe, Japan, United States and Latin America.

Lives at Lake Albano (Rome) and in Tel Aviv.

He has played as soloist with conductors as Claudio Abbado, Riccardo Chailly, Riccardo Muti, Giuseppe Sinopoli, and many others and with orchestras as, among others, Teatro alla Scala di Milano, Maggio Musicale Fiorentino, London Sinfonietta, Münchner und Berliner Philharmoniker, Carnegie Hall in New York.

He has collaborated with some of the major composers of our time, among others, with Luciano Berio, Pierre Boulez, Eliott Carter, Aldo Clementi, Luis de Pablo, Franco Donatoni, Olivier Messiaen, Ennio Morricone, Luca Lombardi, Luigi Nono, Goffredo Petrassi, Henri Pousseur, Wolfgang Rihm, Karlheinz Stockhausen, Toru Takemitsu. Many of whom have dedicated numerous and important works that he performed at their premiers.

He has participated in festivals like the Venice Biennale, Maggio Musicale Fiorentino, Ravenna, London, Edinburgh, Paris, Salzburg, Wien, Lockenhaus, Berlin, St. Petersburg, Tokyo and many others.

The Carinthian Museum of Modern Art, with an exhibition area of some 1000 m², holds solo and theme shows of works by young as well as established regional, national and international artists. The "Burgkapelle" art space, with baroque frescoes by Josef Ferdinand Fromiller, is used for projects by contemporary artists.

Burggasse 8, A - 9021 Klagenfurt am Wörthersee, Austria