loving – It is slow, it seems long. It is short.

A suggestive sky with a special moon fulfils the giant dome of Saint Esprit and carries to inner emotions by symbolizing the course of love in time. A poetic work about our most powerful sentiment, which relates to Paris as the City of Love.

Artsits statement It is slow, it seems long. It is short.

loving is an emotional, romantic work, which treats the experience of Love in the course of time and connects with the City of Paris, considered universally as the "City of Love".

On a special day, I was sitting on my terrace in Rome, while I noticed the half-moon in a very rare vertical position. It was on the 9th September, by chance my grandmother’s birthday, born in 1900. The sky was still bright, voices of people on the streets suggested a serene late-summer evening.

My mood was that of a woman with a broken heart, while reflecting about her own, lost love.

I was here, that strange half part of the moon was there. I observed the moon’s slow crossing over what seemed to me “my sky”. I saw myself as a little individuum on a little place, at a little time, living a little life but with a big sentiment, while I was related to such greater dimensions of distance and time. I started to think about love and time.

In my eyes, that image was dramatically beautiful. It was that, what Love meant for me in this very moment: It is slow, it seems long. It is short. The artistic work, which came out from that experience is the video, I called loving.

A booklet with original text by Gabriel Soucheyre Take me to the moon (I’ll see who I am) in French and English is on disposal:

"... During the suspended time of this show, we are given to live an experience of which we know only the real duration, that of the time of the video but which, seemingly, could be something different, something very personal.

loving is projected in a site-specific setting from the floor to the vertex of the giant main-dome (diameter 22 m and 33 m high) of Église du Saint-Esprit and fills out the cupola with the image of a light-blue sky with two white half-moons. When the moons reach each other at the center of the dome, they create a full-moon with a diameter of 10 m. An image which reminds also on the Pantheon in Rome with its cupola and its oculus. The overall picture on the grand dome suggests an open sky and the recorded urban sounds of a metropolitan life enforce the spectator’s feeling to stand under a big aperture to the open sky and the monumentality of this sacred place with its oversized sense of space, make the viewer aware of his own existence in relation to other magnitudes and enriches the work with a transcendence sense. 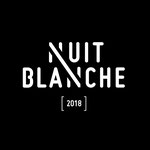